Posted by Queenie on Jun 15, 2021 7:16:11 AM
Article originally published on press.ktm.com
The delayed 2021 MXGP season fired into life with a trip to the impressive and demanding Russian course on the banks of the Black Sea and after a year’s hiatus from the calendar. The inaugural round of the campaign was just the fourth visit by MXGP to the venue and the Grand Prix benefitted from sunny and hot weather conditions for the one-day race format.
- Vialle dominates MX2 with two moto victories on the KTM 250 SX-F
- Herlings 2nd overall in the MXGP class after taking Pole Position
- Cairoli fights for overall podium until second moto crash causes DNF
- All three Red Bull KTM riders in the top ten with Rene Hofer 5th and Mattia Guadagnini 8th
- MX2 holeshots for Vialle and Hofer
MXGP
Jeffrey Herlings captured the first Pole Position of 2021 when the Dutchman pushed his KTM 450 SX-F to the fastest lap in Timed Practice. Herlings made a so-so start in the first moto and managed to reach the finish line in 4th. His prime slot in the gate helped for the second moto when he pushed into the lead on the first lap. The Dutchman then made a mistake that cost him four positions. He was able to recover to 3rd and gained another place in the final two laps. Herlings returned to the box for the first time since his last Grand Prix finish in Italy during the summer of 2020. 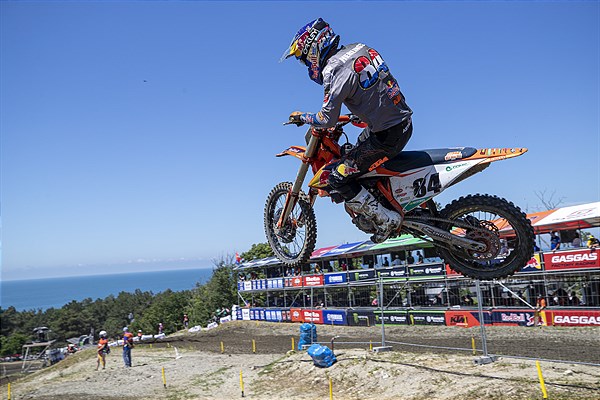 Tony Cairoli was eying overall victory. The Italian took 3rd position in the first moto and led the second race. He was passed by Tim Gajser but was still set for the podium until he crashed on the tricky finish line jump only minutes from the end. Damage to the handlebar and the clutch forced the nine-times world champion out of the running. He was 10th in final standings.
Jorge Prado endured a tough day with two tumbles in each moto. The Spaniard was still able to finish 7th overall with results of 9th and 8th.
Jeffrey Herlings: “I’m happy. These are not the best results and not what we dreamt of but I’m pleased to get on the podium at a track I don’t like so much. I worked my way to 4th in the first moto then had a holeshot, tip-over and then back to 2nd. It wasn’t a bad weekend. Hopefully it gets better from here. I’m already looking forward to Matterley Basin; it suits me better with more grip and lines.” 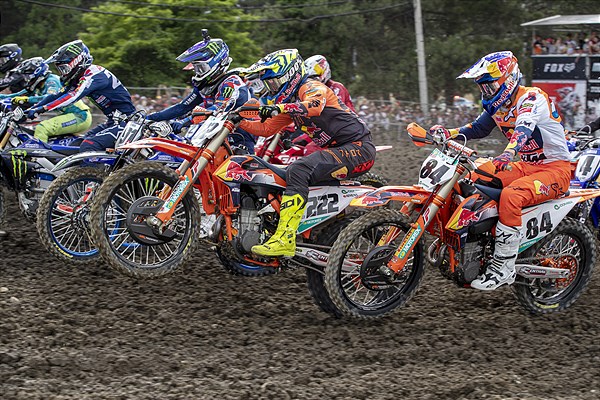 Tony Cairoli: “I’m quite disappointed with my mistake, especially with three laps to go and in a place where many people crash. It shouldn’t have happened and I should have thought a bit more. I was a bit distracted and crashed hard. Luckily, I didn’t hurt myself and wanted to restart as I had some time over the guys behind but the clutch was broken and bar was bent. It’s disappointing because I was feeling very good on this track after struggling in previous years. Let’s regroup and see what we can do in England.”
Jorge Prado: “A very tough day, one of the toughest race-days from the last few seasons. Just bad luck because I had good speed in an easy way. I could have done very well today. I was a bit nervous because it has been so long since we’ve raced. I made a mistake on the third corner of the first moto. On the second lap I completely lost the back wheel coming down the hill and many guys passed me. I came back to 9th from outside the top twenty and that was very good on a track that is difficult for passing. I was a bit disappointed. In the second moto a few guys just didn’t brake, and ran me off the track in the first corner. I got up to 6th but I had to hit the brakes to avoid some of the marshals at a place that was just too slippery and sketchy. My bars were bent and I couldn’t do much. P8 in the end. Somehow I took top ten finishes today which is not what I want…but the best I could do.”
MX2
Tom Vialle came to Russia eager to make a statement as the defending world champion and couldn’t have made a more emphatic imprint on the Grand Prix results. A first moto holeshot and two breakaway performances meant the Frenchman was unchallenged and unmatched at Orlyonok. He took a perfect 1-1 and led all 36 laps from both races.

Rene Hofer finished 5th overall in his first Grand Prix since sustaining a broken arm at round three of the 2020 series last summer. The young Austrian opened his second campaign in the MX2 class with a strong 5th place in the first moto and was then in contention for his first ever podium result after taking the holeshot and holding a top five slot in the second sprint. On the last lap he tumbled after close contact with Ruben Fernandez and crossed the finish line in 4th.
Mattia Guadagnini made his very first Grand Prix appearance since joining the Red Bull KTM Factory Racing team in the winter. The highly rated young Italian gathered valuable experience in his charges to 9th and 10th for 8th overall.
Tom Vialle: “A very nice day! I had a great weekend and I really liked the track. We had a good winter and that paid off today. Two great starts and the work of the team has been amazing, I’m very grateful for that.”
Rene Hofer: “Definitely a good start to the season. I wasn’t that far forward in the first moto but moved up from 11th to 6th on the first lap. I rode quite good in the first half of the race but then ran into some arm-pump and was holding on as much as I could for that 5th place. My riding wasn’t great but top five was OK. A holeshot in the second moto! But a little mistake meant I went back to third. I could keep up with Fernandez quite well until he crashed. I was making time on Tom, so the middle of the race was really good. Some small errors meant Boisrame could get me, and then I went down on the last lap with Fernandez. A shame but I’m still happy to finish top five in the first GP. A lot of chances still remain to get on that podium.”
Mattia Gaudagnini: “Not the best but also not too bad for the first GP of the year. My starts were not great, so we need to work on those: I made my life difficult! I’m pretty satisfied with my riding and the lap-times were pretty good. We can only get better from here. I was 4th in Timed Practice, so that was also a positive.”
MXGP travels back to central Europe and for a swift sequence of six consecutive rounds in six weeks. Round two takes place at the popular Matterley Basin circuit for the British Grand Prix on June 27th.
Results MXGP Russia 2021
1. Tim Gajser (SLO), Honda (1-1)
2. Jeffrey Herlings (NED), Red Bull KTM Factory Racing (4-2)
3. Romain Febvre (FRA), Kawasaki (2-6)
4. Alessandro Lupino (ITA), KTM (5-4)
5. Jeremy Seewer (SUI), Yamaha (6-5)
7. Jorge Prado (ESP), Red Bull KTM Factory Racing (9-8)
10. Tony Cairoli (ITA), Red Bull KTM Factory Racing (3-DNF)
Standings MXGP 2021 after 01 of 19 rounds
1. Tim Gajser 50 points
2. Jeffrey Herlings 40
3. Romain Febvre 37
4. Alessandro Lupino 34
5. Jeremy Seewer 31
7. Jorge Prado 25
10. Tony Cairoli 20
Results MX2 Russia 2021
1. Tom Vialle (FRA), Red Bull KTM Factory Racing (1-1)
2. Ruben Fernandez (ESP), Honda (2-3)
3. Mathys Boisrame (FRA) Kawasaki (4-2)
4. Roan Van De Moosdijk (NED), Husqvarna (3-5)
5. Rene Hofer (AUT), Red Bull KTM Factory Racing (5-4)
8. Mattia Guadagnini (ITA), Red Bull KTM Factory Racing (9-10)
Standings MX2 2021 after 01 of 19 rounds
1. Tom Vialle 50 points
2. Ruben Fernandez 42
3. Mathys Boisrame 40
4. Roan Van De Moosdijk 36
5. Rene Hofer 34
8. Mattia Guadagnini 27

Welcome to the P&H Blog

Find out more about:

By clicking Join you agree to our Terms & Conditions